These tricks allow you to get more than 201 Golden Bananas. You can use them in Max%, but they're banned in 101% and No Levels Early. However, collecting the conveyor belt or seal GB just once does not count as duping and therefore is allowed. 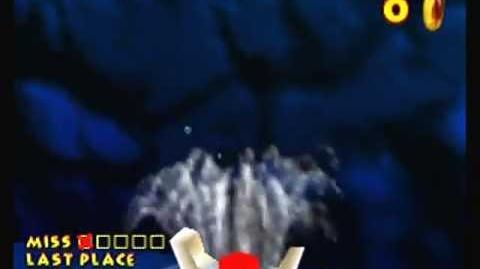 This works with any kong except DK. Use Swim Through Vertical Walls or a C-up clip to enter the seal race. In the area where you start, try to move into the shipwreck at full speed (the one where the Golden Banana comes out after you beat the race). You'll clip into it and collect the banana if your angle is correct. After that, restart the race through the pause menu and you'll be able to get it again. You can get it as many times as you want, and it permanently stays inside the shipwreck, no matter if you've already beaten the race or not. 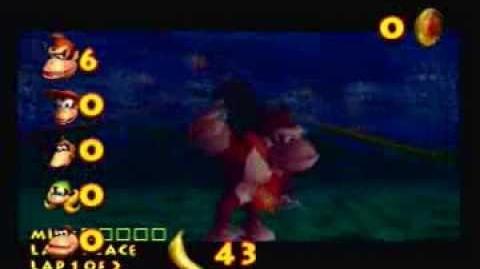 DK's speed in the boat is capped, hence he's the only kong who can't charge into the shipwreck. However, there is a different way to reach the GB that also works with DK. Do a ledge clip on the ramp at the start and once you're behind the wall, approach the ramp that is closest to the ship with the GB in it. Move toward where the ramp meets the ground until you can't go down any further. Then face the ship and charge right at it. You will fly up high into the air and if done correcly, you will land inside the ship where you can pick up the GB. 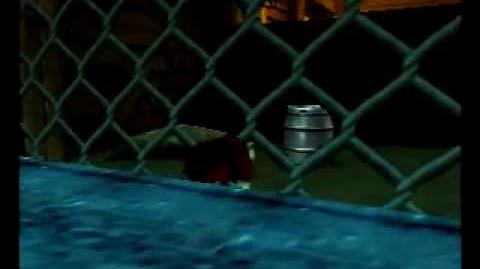 Any kong can get the Golden Banana on the conveyor belt inside the mill over and over again. You just need to get out of bounds to reach it. In the US version, there is a gap between a box and a beam near the Mini Monkey barrel. You can walk through it with DK, Lanky or Chunky (you might need to jump to get through). Alternatively, you can place two steel kegs close together and close to the wall. Then jump between them with any kong and keep holding forward. The kegs will explode and push you through the wall.

After clipping, go to the conveyor belt and grab the Golden Banana. It will be there unless you've already collected it outside the mill. If you reenter the level, you'll notice the same Golden Banana will be there again. You can get it as many times as you want.

In the Crystal Caves 'Beetle Race' map, there are actually 2 Golden Bananas stored. One above the finish podium and one stored out of bounds far away from any of the map geometry (At 5333,5507,5333).

There is currently no known way to reach this golden banana. However, if a method was found, you can get the Golden Banana as many times as you want and as any kong.

The Golden Banana awarded at the end of the Creepy Castle race against the car is stored inside a box in the finishing room (Funky's room).

After bringing a boulder into the race, you can use a TNT box to hit a certain area of the boulder which will enable to you clip out of bounds. Afterwards, you can navigate around the map to the Golden Banana (an additional height boost may be needed).

This can be done as many times as you want. This Golden Banana can be grabbed as any kong, but there only exists a method for Chunky to grab it.

This trick is an offshoot of the Funky Weapons Glitch. It essentially deletes everything in a file except for the play time, the amount of Golden Bananas, regular bananas and coins, and most abilities. Also, all items will respawn because the game forgets which ones you've already collected. The most useful benefit is that you can recollect Golden Bananas to get a faster 101% route or the maximum percentage, which is -124% ironically. Be careful with this trick because if you mess it up, it might overwrite any file on your cartridge. If you're doing a run or playthrough with this, note that you should never collect a banana medal (the ones in Hideout Helm are fine, though) or open a boss door before using the trick, as this can slow you down or kill your run.

The game engine is separated into different modes. For instance the main menu, which is one of them, differs from Adventure by not having the pause menu or the auto-save feature enabled and refilling health automatically.

The Intro Story Glitch allows you to screw up every single mode in the game. If you stop the cutscene within a certain time window where it is "paused", you will unpause the cutscene and get back to the menu while Intro Story keeps running in the background. This way it can cause screen fades after certain amounts of time since it consists of 7 sequenced cutcenes. However, a screen fade can only happen if there's another cutscene present. So if you want to exploit this trick, you'll have to enter a mode and make sure a cutscene shows up.

As for this trick, you'll want to enter Rambi/Enguarde Arena or any boss fight from the DK Theatre menu. This is a mode where any screen fade brings you back to the menu. Now if the Intro Story gets to the next cutscene in line while you're watching the introducing cutscene, the game will throw you back to the menu... and stay in the DK Bonus / Bosses mode since you didn't exit the usual way. When you're about to advance to Monkey Smash, remember that any screen fade will take you back to the menu. That is just what happens in practice, as it skips to the results screen immediately. It also stays in Kong Battle mode (again since you didn't exit the usual way), which is exactly the same as Adventure. Interestingly, the auto-save feature is therefore enabled in Kong Battle, too. (Normally it never even gets the chance to save because it changes back to main menu mode as soon as you exit.) This is why the data from Monkey Smash is written into the loaded file the moment you enter it.

You can manually load a file by simply going to Adventure mode and viewing (not starting) it. Deleting a file works as well. FWG overwrites the file that you last loaded or deleted.

Up to this point, the process is technically the same as Funky Weapons Glitch. Now that you're in Adventure / Kong Battle mode while on the main menu, you can manipulate and save another file. First you view a file, loading it into the game's memory. After that, deleting any file resets all flags loaded from Adventure (true/false indicators, stored as 0 or 1) to 0, whereas the data stored as integers (whole numbers) is not changed at all. Also, the file is selected for overwriting the moment it is erased. The last thing you need to do is to save the manipulated data. An auto save usually happens during screen fades, but if you switch to a different mode such as DK Theatre, nothing will be saved. Instead you need to wait for an Intro Story screen fade, which keeps you in Adventure / Kong Battle mode and saves the game. Once the Intro Story shows up, you know the data has been saved and you can simply reset. In case you're curious what happens if you don't reset: The cutscenes will be playing as usual and at the end, since you're in Adventure mode, you will be able to control DK in his tree house as well as pause and save.

Integers, not changed during a banana dupe:

Flags, reset during a banana dupe: 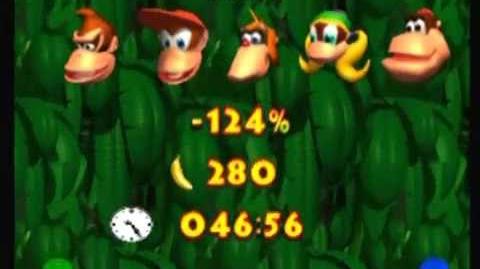 Each kong can have 7 GB's per level as a max. Even though the counter keeps going up if you get more than 7, once you restart the game 8 will be missing. This is because the GB counters are saved as 3 bit integers that range from 0 to 7. Therefore the maximum number of GB's is 7 (GB's per kong and level) times 5 (kongs) times 8 (levels), which makes a total of 280.