The barrel jump is a trick that allows you to quickly hop out of a training barrel right after it has been completed.

In order to explain how jumping out of each individual training barrel is done, the barrels will be referred to with numbers:

A barrel jump only works if you enter the training barrel right when it is at its highest position and about to descend. When you exit, start holding A as the screen goes black or before it fades in. Also, hold the joystick toward the next training barrel. You will instantly jump out and after a few seconds, DK will be forced to the ground, which is caused by the animation when exiting a barrel.

If you manage to exit barrel 4 prematurely, you will be able to do one roll before the Squawks cutscene starts.

The timing for entering a barrel is extremely precise and shouldn't be attempted purposely. Instead, there are two possible scenarios that you will want to happen in runs. 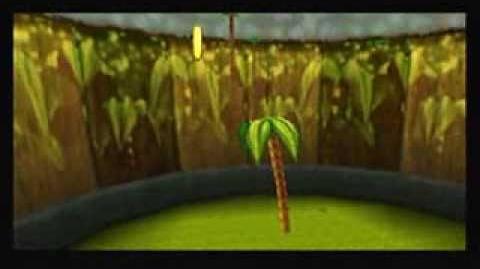 This scenario relies how long it takes you to get from Cranky to barrel 1 because you will need to get a barrel jump from barrel 1. Since there is just a pure rolling section right before it, you will waste time in any case if you try to time the barrel entry.

If you are lucky and get the jump, you will be able to reach barrel 2 with an aerial attack before he is forced down. However, he will fall down after you enter barrel 2.

If you don't get the barrel jump, there is still hope for scenario 2.

After completing barrel 2, DK will still stand on the ground, allowing you to start running immediately. You'll want use this opportunity to do a roll in order to get to barrel 3 before the falling animation starts.

Just like that, DK will fall out of barrels 2, 3, and 4 before the actual mini game starts, and you will be able to roll out of these barrels. 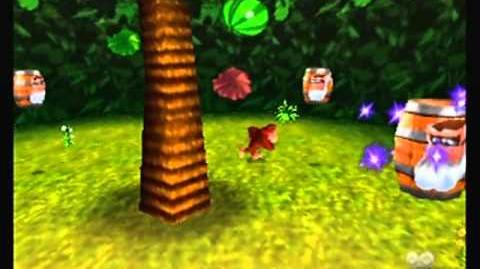 After exiting barrel 1, run straight toward barrel 2 without rolling or kicking. Simply run and jump into it. That increases the odds of getting a barrel jump out of barrel 2.

If you get the barrel jump, don't do an aerial attack. Instead run toward barrel 3 and wait for the short "falling" animation. After that, jump into the barrel. If you jump before the animation, you will be stopped during your jump and fall down.

You won't be able to do a barrel jump from barrel 3 unless you lose some time and luckily enter it during the "barrel jump time window".

After exiting barrel 3, instantly do a roll toward barrel 4 and jump in. If the timing is correct, you will be able to do another barrel jump.