After getting all 40 blueprints, go to Snide's H.Q. in any level. Press C-up to get to the bonus game menu, then simply press A and B at the same time. Instead of starting the bonus game that was highlighted, the game will put you into a secret room that was apparently used to test the game mechanics.

The first thing you'll notice is that there's a clone of DK motionlessly standing in this room. If you look closely though, you'll notice he blinks from time to time. Also, there are four pillars you can climb and a yellow balloon floating around. There are no bounds in this room, but if you try to walk out into the black, you will respawn at the spot where appeared the first time. You'll also find you're always at full health and cannot damage yourself with oranges. The pause menu and the auto-save feature are disabled as long as you're in the room. Resetting is the only way to get out, unless you try this.

There are well-known theories on why this room exists, but they have proven to be wrong. It is not an easter egg nor a beta element, nor did the developers simply forget to remove it from the final version of the game. If reaching the room was intended by the developers, they would certainly have made sure not to force the player to reset. In fact, it is a wrong warp glitch that could have been easily fixed.

When you press B on the bonus game menu, you will get back to the initial menu (the one with three options), which is assigned the value 0. Combining that with an A press to load a bonus game writes that 0 into the "next map" address as the screen fades out. The map with the number 0 happens to be the test map. Given that fact, it is likely the first map that was created in the whole game.

The reason the bonus games and test map don't have the pause and auto-save features is because they are not part of Adventure mode. They use a different mode. 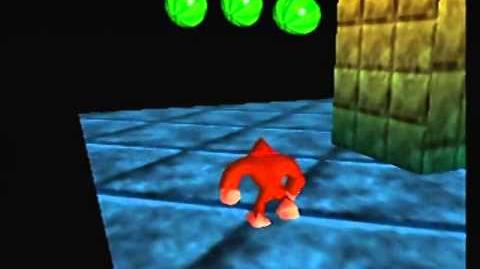 The Only Way Out

If Intro Story Glitch is active while you're there, you can play your instrument ~50 seconds after ISG activation to cause a screen fade. That turns out to be an "exit bonus game" trigger, so you will appear back in Snide's H.Q. However, the game stays in "Snide's Bonus Games" mode until you press B to exit. That will reload Snide's H.Q. and revert everything back to normal and, if you shot the balloon, save it permamently so it won't be there when you return to the test map. 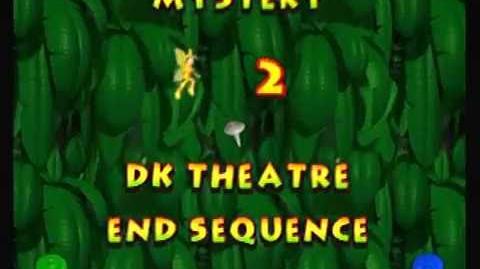 The developers used DK's duplicate for different animations in cutscenes, such as Intro Story. There's an easy way to prove this: View a file that already has DK's Bongo Blast, then turn on infinite instrument energy and do the Intro Story Glitch. (Alternatively, if you don't have the cheats menu, start the file with Bongo Blast, quit the game, head back to Mystery Menu and do ISG.) Now wait for roughly 30 seconds and go to End Sequence. After a while, the cutscene will be interrupted and Intro Story will play. Wait until the scene inside the tree house shows up and press Z and C-up before it ends. DK will play his bongo outside the house even though he should still be inside. Press C-up and you'll be able to see the motionless clone from behind the wall.